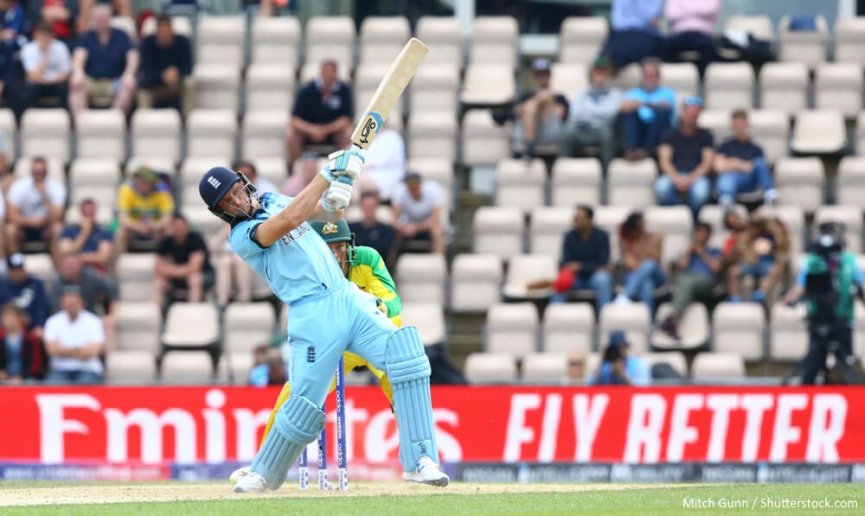 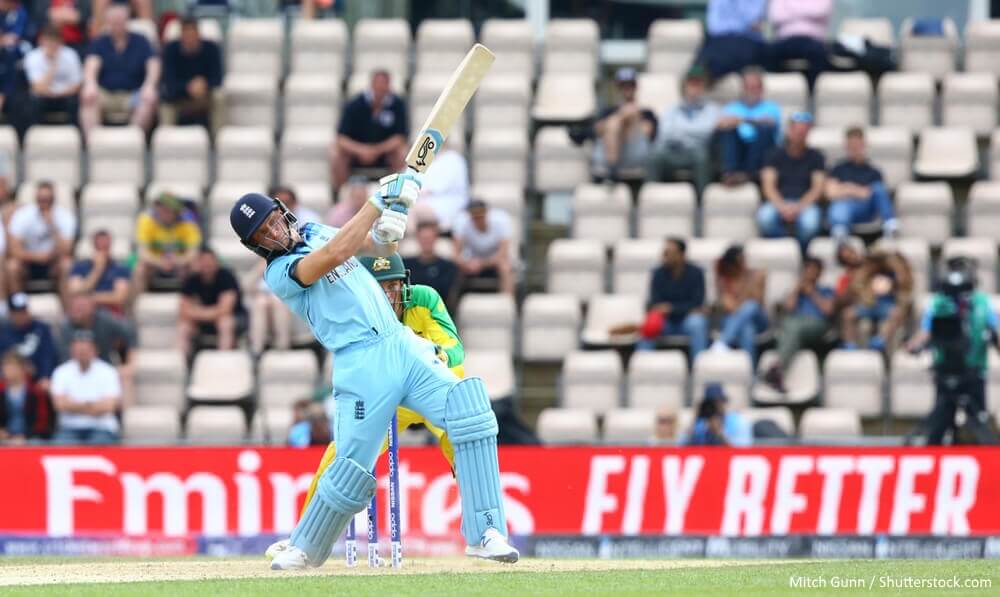 Jos Buttler of England hits out during the England v Australia (May 2019, ICC Cricket World Cup)

England will be playing for their lives when they will face India in the match 38 during the 2019 International Cricket Council (ICC) World Cup in Birmingham on Sunday.

The home side started the competition as the red-hot favorites to lift their maiden 50-over title — that too on their home soil.

However, that dream seem some distance away as the hosts are currently a strong contender of missing out on a place in the final four.

After having just eight points in seven matches which include defeats against weaker oppositions like Sri Lanka and Pakistan, England now find themselves in a position where they have to win their both remaining matches to cement their place in the semi-finals.

Methodologically, it is a simple deal as any team will be comfortable knowing that they have their fate in their own hands and all they have to do is win the remaining fixtures and they will be through to the next stage.

However, it is far more complicated then it seems as their opponent in those matches will be two of the strongest teams in the competition — India and New Zealand.

In first of those two do-or-die matches, Eoin Morgan-led unit will face Virat Kohli-led side, a contest which on paper is an even one.

England have an outstanding firepower in the batting department and have a decent bowling attack, whereas India have great talent all around.

But once again, it is not as simple as that. England’s recent form suggest that their confidence is low and coupled that the pressure of expectations of being the number one side and the hosts as well, and you are looking at a totally different side who look vulnerable to say the least. On the other hand, India’s recent victories and the manner of which they bossed the opposition suggest they are the team to beat in the competition

To make matters worse for the home side, England will face India who are undoubtedly the best bowling unit in the competition, that too on a pitch which has proved to be the most difficult one to bat on.

Even history doesn’t give the home side much hope either as it is the same venue where they lost the 2013 ICC Champions Trophy final—that too against the same opposition.

In that match, the team led by Alastair Cook could not even chase down the target of 130 in 20 overs in a rain-effected encounter and spin played a massive part on the proceedings.

As per the squad composition, England will be once again heavily relying on their batting firepower in the presence of players like Captain Morgan, opener Jonny Bairstow, veteran right-hander Joe Root, all-rounder Ben Stokes and explosive wicketkeeper-batsman Jos Buttler.

With the likely return of opener Jason Roy, the home side will receive a major boost ahead of the all-important clash but it will be interesting to see how he will perform after missing team’s two previous matches due to injury.

After losing the previous match against Australia comprehensively, it is highly possible that the team management will make some changes in the bowling department and bring Liam Plunkett back in the mix.

If England did falter against India, then they will have to pray that both Pakistan and Bangladesh will lose one of their remaining two matches.

On the other hand, team India will be looking at this match as an opportunity to stamp their authority even further on the proceedings.

The Men in Blue — who will not going to be wearing blue in the match — are currently the only unbeaten side in the competition with 11 points in six matches and therefore, they just a need a point in their remaining three matches to cement their place in the final four.

On paper, India have the best squad in the competition where they have the likes of captain Kohli, Rohit Sharma, MS Dhoni and Hardik Pandya in the batting department — a force which can destroy any bowling lineup on any given day — whereas in the bowling department, there are world-class bowlers in abundance like Jasprit Bum, Mohammad Shami, Kuldeep Yadav and Yuzvendra Chahal — a combination which is more than just capable of destroying any batting lineup in any conditions.

Edgbaston in Birmingham will be used as the venue for the contest which will be hosting its 61st ODI on Sunday. There have been two matches played in the competition and both times teams batting second emerge victorious.

However, it is worth mentioning here that the pitch became difficult as the day proceeded in both games and on both occasions, little margins helped the victorious teams.

In the match between New Zealand and South Africa, Proteas did lose the match but ended up giving so many chances to Kane Williamson, who scored a breathtaking unbeaten century and took his team home.

In the other match, it was the Black Caps poor planning which cost them as they went in with just one premium spinner on a pitch where there was too much on offer, a move which assisted Pakistan in achieving a memorable triumph.

Keeping that in mind, it will come as no surprise if India will go in with Ravindra Jadeja in place of Vijay Shankar, whereas, England might be thinking of going in with Liam Dawson to bolster their spin attack.

Highest individual score at the ground in a One-Day International was registered by New Zealand’s Glenn Turner in 1975. In total, there have been 21 centuries scored at the ground and most of them came from England batsmen (12).

Best bowling figures of 6-52 was registered by Australia’s Josh Hazlewood in 2017. In total, there have been eight five-wicket hauls in ODIs at Edgbaston.

On Betway Sports, Joe Root has been placed at 3.60 in the Top Batsman Category for the game against India. For India, Virat Kohli has placed at 2.80 to be the standout performer for the side against England.

In the man of the match category, Virat Kohli has been placed at 7.50, while Joe Root is second on the list at 9.00.

Based on current form, India will be favourites to win their game against England. With plenty of firepower in the batting and bowling department, India will be keen to maintain their unbeaten streak in the competition.

On the other hand, England will need to raise their game with the bat and ball in order to upstage India in this game. Expect India to beat England in this game.