Mixed martial arts (MMA) has become popular across the globe over recent years, thanks largely to the increased exposure of the Ultimate Fighting Championship (UFC), which has become a global phenomenon. As a result, many bookmakers have picked up on this increase in popularity, with betting on MMA matches having become a common pastime too.

This guide will provider readers with information surrounding everything that there is to know about wagering on MMA, with a specific focus upon the UFC.

A number of betting sites now cater for punters looking to place bets on UFC and other MMA matches, with each performing differently when it comes to markets, odds and additional features. However, it is 888sport that stands out from the crowd in our opinion in this area, with the bookmaker covering all fights, as well as offering some of the most competitive prices online today.

The History of MMA

The term MMA is believed to have first been used in a review of UFC 1 in 1993, with the first regulated MMA event having taken place in Mississippi in 1996. Rules of the event were taken from an adaption of kickboxing, which allowed take downs and ground fighting. A year later, Battlecade Extreme Fighting modified the existing rules, with the creation of three five-minute rounds being introduced, along with different weight classes.

The UFC had been founded in 1993, with early events having been staged in order to identify the most effective martial art in a contest featuring minimal rules. The UFC now has television deals in Europe, Australia and Asia, helping to increase its popularity. The promotion now has a revenue of over $600 million, with fighters being recognisable athletes across the globe.

Which UFC / MMA Events Are Good to Bet On?

When it comes to betting on MMA, the following events are the most popular to bet on:

UFC – The UFC was founded in 1993, quickly becoming the number one brand in the world of mixed martial arts. Fights from the Octagon now attract interest from around the world, with the UFC having been the first organisation to host fights in a cage. The likes of Conor McGregor, Nate Diaz and Khabib Nurmagomedov are among the biggest names in the UFC today, with almost 500 events having now been hosted by the Las Vegas-based company. Many online UFC betting sites offer a large number of different markets for UFC & MMA betting.

Bellator – Established in 2008, Bellator is owned by Viacom, who have helped the event become widespread across the globe. Fighters including Ryan Bader and Rory MacDonald are some of the standout names from Bellator, which is covered by a number of online bookmakers today.

ACB – Having only been founded in 2014, ACB is one of the newest MMA events around, standing for Absolute Championship Berkut. The Russian-based organisation has already staged almost 100 events, with the best fighters involved including Beslan Isaev and Musa Khamanaev. With ACB having partnered with a number of other European promoters, it comes as little surprise that an increasing number of betting sites are also offering markets in this area.

One Championship – Singapore-based organisation One Championship was founded in 2011, quickly becoming Asia’s biggest MMA promotion. The likes of Bibiano Fernandes and Angela Lee help to attract the interest of both MMA fans and punters, with the increase in exposure having also caught the attention of bookmakers.

The Odds in MMA / UFC

With a large number of sites now offering MMA betting markets, it is important for punters to ensure that they are taking advantage of the best online UFC betting odds available. This can be done by utilising the many UFC odds comparison platforms that are available online today, with events and matches throughout the year being covered. Meanwhile, Sportsbetting24 delivers UFC predictions for the most high-profile matches, lending punters a helping hand ahead of the fight getting underway.

When it comes to MMA, the majority of available markets surround short-term bets, which are based around upcoming fights. However, a small number of bookmakers will offer punters the opportunity to place more long-term bets, including betting on which fighter will become the new champion in the UFC. Such odds generally come with more appealing prices, which reward those who have the patience required to place such bets.

Which Markets Are Usually Available to bet on with MMA / UFC?

With betting on MMA having become so popular over recent years, the number of markets available to punters has also increased significantly. However, the following markets are the most commonly found when it comes to betting sites offering MMA markets:

Winner – This market simply means that punters are betting on the individual who will win the fight. Such a bet does not take into account the method of victory, meaning that as long as you back the fighter who comes out on top, you will win.

Method of Victory – For those looking for enhanced UFC odds, some betting sites will offer punters the opportunity to back on the method of victory, as well as which fighter will come out on top. Fights can generally be won by KO/TKO, submission or via decision, meaning that those in the know are in with a chance of earning increasing winnings.

Total Rounds – The total round market provides the opportunity for punters to bet on the number of rounds in which the fight will or will not last. For example, you may wish to bet on over 4.5 rounds for an upcoming UFC match, meaning that the fight must go to at least the fifth round in order for your bet to be successful.

Round Betting – Another popular MMA bet is to bet on which round the fight will finish in, with MMA odds in this area generally being quite lucrative. Again, the method of victory does not matter.

Many bookmakers were fairly slow to catch on in terms of live MMA betting markets, however this form of wagering on the sport has started to become more popular, especially for those looking for greater value on their picks. It is mainly UFC matches that can be bet upon live, which means that bets can be placed even after the fight has started.

UFC Odds are updated by bookmakers depending on what is taking place in the cage, with those who are able to stake at the right time potentially being able to earn some significant winnings. Meanwhile, markets may be suspended at times in the event of a major incident occurring. When it comes to live UFC betting markets, fight result, round betting, over/under and method of victory and decision are normally available to punters.

As previously mentioned, there are a number of sites catering for UFC betting fans based in India today, with all coming with different advantages and disadvantages. The likes of Betway, 888Sport, Leo Vegas, 22Bet and Bet365 all score highly when it comes to online UFC betting odds, offering a range of markets, along with features such as live streaming and cash out, which only make betting on the sport all the more appealing.

Meanwhile, punters should regularly come back to our site to check out our UFC predictions. However, it is 888sport that is the best option for Indian MMA betting fans, with the bookmaker providing UFC odds on all fights, a range of markets and the occasional MMA-specific promotions.

The Stars in MMA

With UFC currently being the standout promotion in the world of MMA, it comes as little surprise that the biggest stars in the industry come from the American organisation. The following are the standout fighters, who betting sites regularly feature on their platforms.

Despite his future within the sport being up in the air, McGregor’s name is now synonymous with the UFC, with the Irishman having previously been the featherweight and lightweight champion. McGregor began his MMA career in 2008, before signing with the UFC in 2015, where he defeated Jose Aldo in just 13 seconds. McGregor became the first fighter to hold two UFC titles in two different weight categories.

Russian superstar Khabib Nurmagomedov is the reigning UFC Lightweight champion, having beaten Conor McGregor in order to extend his record to 27-0. His record is the longest undefeated steak in MMA history, with Nurmagomedov having previously become the first Russian to win a UFC title. His PPV fight with McGregor drew in $2.4 million, a record for an MMA event. He is currently ranked No.2 in the official UFC pound-for-pound rankings.

Amanda Nunes is one of the biggest names in the world of female MMA, with the Brazilian currently holding the Women’s Bantamweight and Featherweight titles. Nunes is the first women in UFC history to hold two titles simultaneously, with many regarding her as the greatest female mixed martial artist of all time.

Shevchenko is the current UFC Women’s Flyweight champion, having beaten Joanna Jedrzeiczyk at UFC 231. Shevchenko is widely considered as one of the best fighters in the world today, with the Kyrgyzstani-Peruvian having started in both kickboxing and Muay Thai. 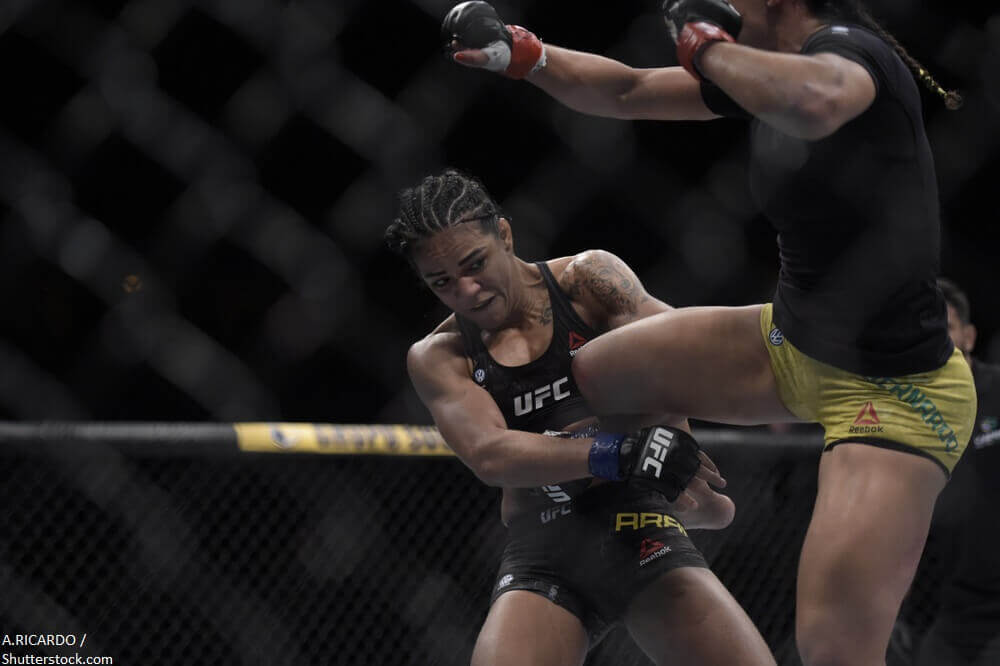 ❓ How much revenue does the UFC draw in annually?

Last year, the UFC drew in $600 million in revenue. This leads to some pretty lucrative betting markets for punters.

💰 What are the best MMA events to bet on?

If you’re hoping for a large sum of prize money should you win, then there are few events to keep an eye on. UFC, Bellator, ACB, and One Championship are the biggest MMA events.

🔢 Is it better to place short- or long-term bets?

The answer will vary depending on how much money how patient you are and how familiar you are with MMA. While the majority of markets are for short-term betting, more bookmakers are allowing punters to place long-term bets. Long-term wagers usually have more affordable prices as well.

💪 What are the most common markets for MMA betting?

The four most common bet types are winner, method of victory, total rounds, and round betting. The first three are fairly self-explanatory. Round betting involves guessing which round the match will end during.

🚩 How do I start betting on MMA matches?

In order to start betting on MMA, it’s important to find a betting site that best suits your needs. Consider available markets, MMA odds, and promotions. Having done so, it is then crucial to come up with a strategy for placing bets, which can involve our tips and recommendations.

🤙 Who is Amanda Nunes?

Amanda is a fighter from Brazil who is currently undefeated in the UFC Bantamweight and Featherweight divisions. She’s considered the one towager on in these weight classes for women’s matches in 2020.

🏅 What are the weight classes for MMA fighters?

🌟 Who is Khabib Nurmagomedov?

Khabib is a fighter from Russia who is currently undefeated in the UFC Lightweight division. His match against McGregor drew in $2.4 million, a record for an MMA event.

🔐 What is the best wager type for beginners?

If you’re new to betting on MMA, keep it simple. Making a money line bet on who will win or lose the match is the easiest type of bet to place.

✅ How do I read the odds on a UFC fighter?

It is clear from our guide that the increase in popularity of MMA, and in particular the UFC, has had a significant impact upon the way in which betting sites treat such events. As a result, there are now a wide range of options available to punters in this area, including bookmakers, markets, MMA odds and additional features.

As a result, there has never been a better time to get involved with betting on one of the fastest growing sports in the world, with this betting market only set to go from strength to strength. So, find the bookmaker which bets caters for your needs, before betting on your favourite fighters from the world of MMA.