After 45 matches at the round-robin stage, the 2019 International Cricket Council (ICC) World Cup is now finally entering in the knock-out stage and the excitement is about to reach new heights.

Australia, England, India and New Zealand are the remaining teams in the competition who will now take part in two semi-finals for a spot in the grand finale which is going to be organised on July 14 at the home of cricket—Lords.

First of those last-four clashes will be between Virat Kohli’s India and Kane Williamson’s New Zealand, which will be played in Manchester on July 9.

Understandably, the Men in Blue will enter the contest as heavy favorites as they finished the round-robin stage at the number one spot with 15 points out of the possible 18.

The 2011 World Champions have been quite efficient throughout the tournament in all three departments and looked unnerved with the pressure of the big stage.

However, to some people’s surprise, the team from the subcontinent who are famous for their batting for the last decade or so, are now looking more of a threat in the bowling department as they have pretty much all of their basis covered.

Presence of wicket-takers like pacers Jasprit Bumrah, Mohammad Shami, Bhuvneshwar Kumar and wrist-spin duo Kuldeep Yadav and Yuzvendra Chahal is an evident sample of variety and depth in the bowling department of the team. 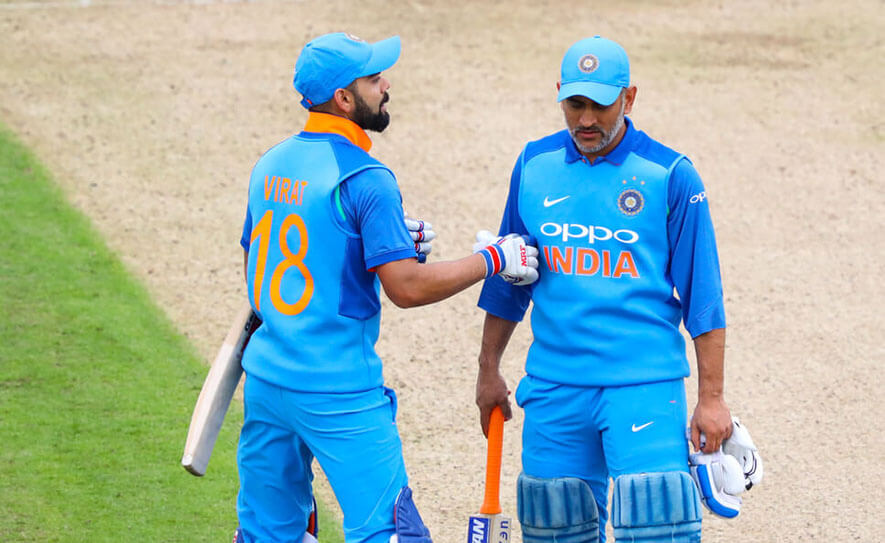 Out of the above-mentioned lot, right-arm pacer Bumrah is being the pick of the bowlers as he has 17 wickets to his name in eight matches at a strike-rate of 26.1 and with an impressive economy-rate of just 4.48. Those numbers become even more impressive considering the fact that the 25-year-old bowled right at the start of the innings or at the back end where batsmen are normally on the charge.

In the batting department, the Men in Blue are once again relying heavily on the top-order as the top- three have scored the bulk of the runs for the team.

In the absence of veteran opener Shikhar Dhawan who was ruled out after sustaining an injury in the match against Australia earlier in the competition, his partner Rohit Sharma has taken the responsibility of providing brilliant starts to his team upon himself and has been the best batsman of the competition so far with 647 runs at an outstanding average of 92.42 and with a strike-rate of 98.77, which included five centuries and a fifty in just six innings.

Other than the Mumbai Indians captain, Kohli has also been in pretty impressive form to say the least as well he has scored 442 runs at an average of 63.14 and at a strike-rate of 95.05, which included five half-centuries.

However, India’s middle and late-middle order have been a cause of concern for the team management as they have been found wanting at numerous occasions in the tournament and there is too much reliance on Hardik Pandya to provide a big finish.

On the other hand, New Zealand enter the contest as underdogs as they are the only side remaining who have not beaten either of the remaining three sides in the competition.

The Black Caps have only managed to enter the final-four stage on better run-rate after finishing equal with Pakistan with 11 points on the table.

Many believe that the Black Caps are purely lucky to be still alive in the competition, thanks to Sarfaraz Ahmed’s men’s woeful start to their campaign when they suffered a hammering in their opening match against West Indies.

New Zealand team management will be relatively cautious going into the business end of the mega event as well as they know that their team have not looked competitive against the big boys, therefore, they have a lot to catch up if they are to register results better than four years ago.

The team is clearly depending on the bowling strength where pacers have played a key role in guiding the team to the semi-finals.

Right-arm fast-bowler Lockie Ferguson is having an excellent tournament with the ball in hand as he is the leading wicket-taker for the Black Caps with 17 scalps in seven matches at a strike-rate of 22.4 and with an economy-rate of 4.96.

He is being well-supported by left-arm pacer Trent Boult who has 15 wickets to his name in eight matches at a strike-rate of 31.6 and with an economy-rate of just 4.68.

On the batting front, it seems that Williamson is fighting a lone battle as he is the only batsman in the team who has average in excess of 50.

The right-hander is by New Zealand’s best batsman in the tournament and the leading run-scorer with 481 runs at an average of 96.20, which included two centuries and a fifty.

Looking at India’s bowling strength, the Kiwis team management will know that only Williamson will not going to be enough to take the team home and will need support from the likes of experienced Martin Guptill and Ross Taylor.

Old Trafford is the venue for the all-important encounter, which will be hosting its sixth match in the ongoing competition.

Both teams will go in the Tuesday’s match unbeaten at the ground during the 2019 ICC World Cup which makes this contest even more exciting.

The two-time World Champions will feel relatively confident as they have victories while playing at the venue against Pakistan and West Indies, whereas the Black Caps have also registered a win against the Caribbean giants despite unreal brilliance from Carlos Brathwaite.

Surprisingly, in all of those three matches, it was the team batting first who emerged victorious, therefore toss is likely to play a crucial role in deciding the game’s outcome as well.

Average first innings total in a 50-over contest at the Old Trafford is 225, whereas average second innings score is 197. Highest total chased at the ground was 286-4 whereas lowest total defended at the venue in an ODI is 221-8.

Highest team score in an international 50-over match of 397-6 at the venue was registered by England while playing against Afghanistan, whereas lowest total by a team of 45 was registered by Canada in the match against the home side in 1979.

Based on current form, India is outright favorites to win their game against India. The side has quality players like Virat Kohli, Rohit Sharma and Jasprit Bumrah in their ranks. Two-time World Champions will be keen to bring their A-game to the table in this semifinal clash against New Zealand.

Expect India to beat New Zealand by a comprehensive margin.

In the man of the match category, Rohit Sharma has been placed at 6.00, while Kane Williamson is third on the list at 9.00.