After more than 40 days of non-stop action of the round-robin stage, , the 2019 International Cricket Council (ICC) World Cup is now finally entering into its final phase where four teams will battle it out to become the world champions.

Australia, England, India and New Zealand are the remaining fab-four teams in the competition who will now take part in two semi-finals for a spot in the grand finale which is going to be organised on July 14 at the home of cricket—Lords.

Second of those last-four clash will be between the two arch-rivals—Aaron Finch’s Australia and Eoin Morgan’s England—which will be played in Birmingham on July 11.

On the other hand, for England, the game is massive in the context of their sporting history. This is the team which have never won a major 50-over competition and they are facing their arch-rivals in a knock out match, combine it with the fact that they are playing on the home soil and the expectations are sky high because they are also the number one-ranked side in the format.

All of those things meant that England will enter the match on Thursday extremely tensed knowing anything but a positive result will be termed as a disaster to say the least. This will be the home side’s first semi-final appearance in the ICC World Cup since 1992 so nerves can be expected.

On form, England can feel good about themselves as they are on a run of two consecutive victories which came in the match against India and New Zealand.

As far as team’s fitness is concerned, there is no major problem which meant that the complete squad will be available for selection.

England’s batting have been pretty consistent in the competition where veteran right-hander Joe Root is the leading run-getter with 500 at an average of 62.50 and with a strike-rate of 91.74, which included two centuries and three fifties. 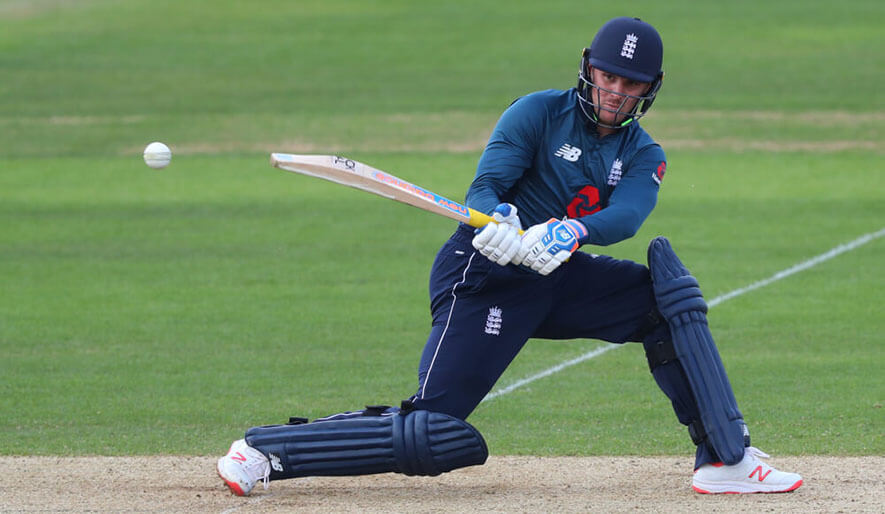 Jason Roy of England plays a shot during the England v Pakistan, MAY 11 2019 | Mitch Gunn / Shutterstock.com

He is being well-supported by opener Jonny Bairstow, who has scored 462 runs at an average of 51.33, which included two centuries and two fifties.

In the bowling department, the home side have been heavily relying on the pacers. Young Jofra Archer is being the pick of the bowlers for the team with 17 scalps in nine matches at a strike-rate of 28.50 and with an economy-rate of 4.68.

He is being well-supported by fellow fast-bowler Mark Wood who has 16 wickets to his name at a strike-rate of 26.50 and with an economy-rate of 23.06.

In the previous meeting between both teams earlier in the competition, it was Australia who came out on top with a 64-run margin

Kangaroos will enter the match a little shaken after suffering a surprised defeat in their last match against South Africa, which also took away their chance of a relatively easier semi-final against New Zealand.

The team management will now know that they have a serious job in front of them as they face the home side who are on a run of two impressive wins and in the due process, looked unstoppable to say the least.

In the previous game, defeat was not the only bad outcome for the defending champions as they were also struck with major injury problems as well.

Left-handed batsman Usman Khawaja’s World Cup is now over after suffering a grade one hamstring injury, whereas all-rounder Marcus Stoinis is also suffering from a side strain and is doubtful for the match on Thursday.

In-form wicketkeeper-batsman Mathews Wade has been included in the squad as the replacement for Khawaja whereas all-rounder Mitchell Marsh is being called as a cover for Stoinis.

In the new scenario, there will be even more pressure on the likes of captain Aaron Finch, veteran opener David Warner and former skipper Steve Smith to score bulk of the runs for the team.

Warner is the leading run-scorer for the Kangaroos and second-highest in the competition overall behind India’s Rohit Sharma with 638 runs in nine innings at an outstanding average of 79.75 and with a strike-rate of 89.48, which included three centuries and three fifties.

He is very-well supported by captain Finch who has scored 507 runs at an impressive average of 56.33 and with a strike-rate of 102.21, which included two centuries and three fifties.

On the bowling front, Australia have shown that they have one of the best attacks in the competition, especially in the presence of someone like Mitchell Starc.

The left-armer is the leading wicket-taker in the competition with 26 wickets in just nine matches at an outstanding strike-rate of 19.20 and with an average of 16.61, which included two five-wicket and two four-wicket hauls.

He is being well-supported by fellow pacer Pat Cummins who till now has 13 wickets to his name in nine outings at a strike-rate of 36.50 and with an economy-rate of 4.96.

Edgbaston in Birmingham is the lucky venue for the mouth-watering contest and it will be hosting its 63rd ODI. Till now, the venue has hosted four matches during the ongoing competition where twice teams batting first and twice teams batting second emerged victorious.

Surprisingly, in two of the matches, the playing surface was one of the toughest one in the competition, whereas in the other two matches, 300 or more were scored in three out of four innings.

Highest team score of 408-9 in a One-Day International at Edgbaston was registered by the home side in the match against the Black Caps in 2015 thanks to centuries from Root and Jos Buttler, whereas lowest team total of 70 was registered by the Kangaroos in 1977, courtesy brilliant bowling spell from England’s John Lever.

Till now, 24 players have scored centuries in a 50-over contest at the venue and four of them came in the 2019 ICC World Cup.

Best bowling figures at the ground in an ODI was recorded by Australia’s Josh Hazlewood in the match against the Black Caps during the 2017 ICC Champions Trophy.

For Thursday, there are some light showers expected in the afternoon and evening which might have an impact on the game’s outcome.

Our England vs. Australia Betting Tip:

In the man of the match category, David Warner has been placed at 8.00, while Jonny Bairstow is third on the list at 9.00.

England vs. Australia Odds and Predictions:

World Champions will be favorites to win their game against England. With the likes of David Warner, Aaron Finch, Steve Smith firing on all cylinders, where Mitchell Starc and Jason Behrendorff have made consistently made early inroads with the new-ball.

Expect Australia to overcome England in this contest.