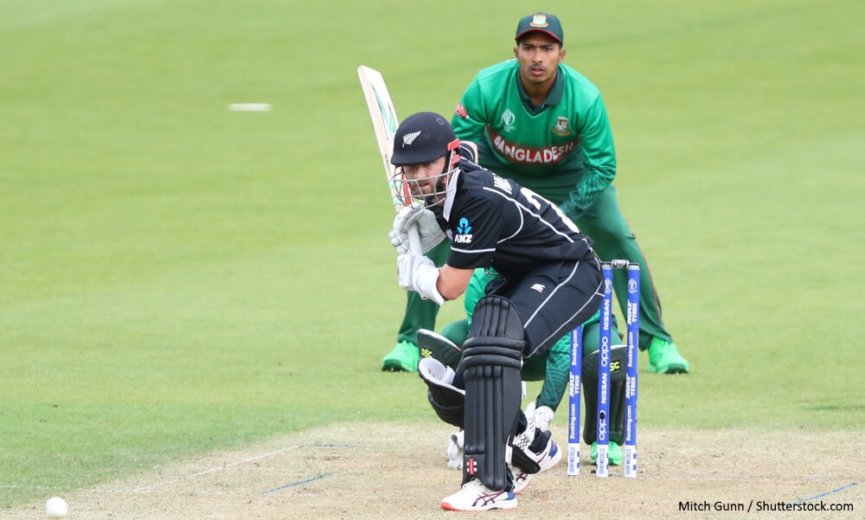 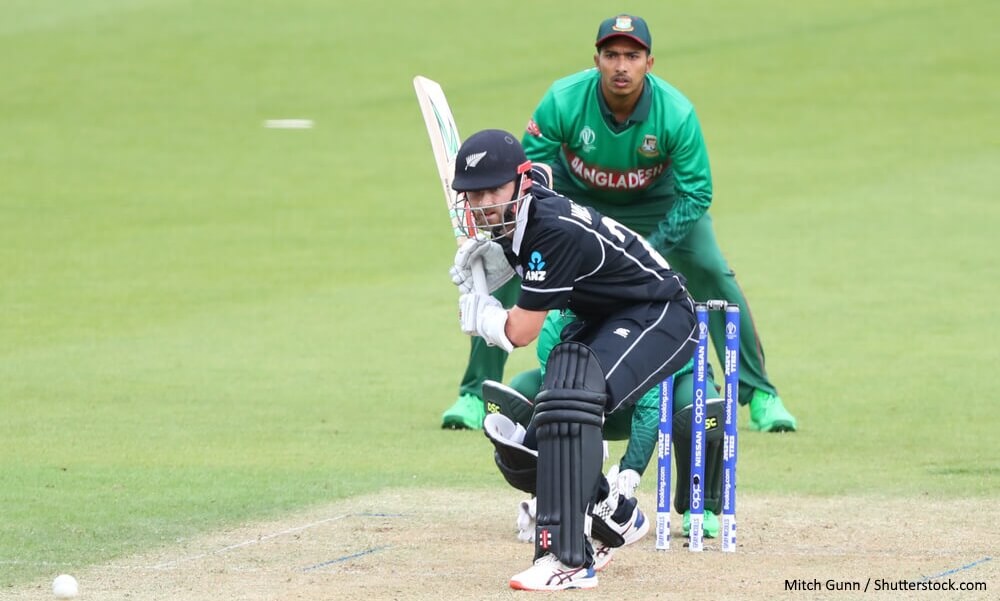 Kane Williamson (NZ) during Match against Bangladesh – Placed at 2.75 for this Game on Betway Sports | 5th June 2019 Kia Oval, London

England and New Zealand will clash in a virtual quarter-finals during the 2019 International Cricket Council (ICC) World Cup in Chester-le-Street on Wednesday. With the tournament coming in to the final phase of round-robin stage, the organizers will be extremely pleased knowing that till now, there have been only one team certain of playing the semis—Australia.

Therefore, still three more spots for the final four are up for grab and it is pretty much down to four teams fighting it out for that.

Two of those teams are England and New Zealand who will be playing their respective final game on Wednesday.

In all theory, the game is an interesting one for both teams as both are still very much in the running for a place in the final-four, yet a poor result in their final match can end their respective journey in the tournament depending on the result elsewhere.

England’s tournament is being less than satisfactory to say the least as they only have 10 points after eight matches, a tally which does not represent that they entered the tournament as the hot favourites and are still ranked as the number one team in the One-Day Internationals (ODIs).

So far, the home side who are in the quest to finally lift their maiden major title in the 50-over format, have won against Afghanistan, Bangladesh, India, South Africa and West Indies, whereas suffered defeats against Australia, Pakistan and Sri Lanka.

Therefore, their equation is pretty straight forward as a win will be enough to guaranteed them a third spot, whereas a defeat will leave them praying for Pakistan’s defeat in their final match against Bangladesh on Friday—a scenario they would love to avoid.

The star performers in that match was returning opener Jason Roy who missed team’s previous two matches due to injury, under pressure Jonny Bairstow who was in the news for wrong reasons, in-form all-rounder Ben Stoker who played a breathtaking knock during the final stages of the innings and Chris Woakes, who performed brilliantly and was pick of the bowlers for the home side.

Therefore, the team management will be rightly hoping for all four to continue their same performance and play a big role in guiding the team home in the final game.

However, there will be concern in the team’s ranks and file regarding captain Morgan’s form off late as he was dismissed twice cheaply in the previous two matches—both times on a short delivery from Australia’s Mitchell Starc and India’s Mohammad Shami.

After an impressive win against one of the tournament favourites, England are expected to field the same playing eleven which mean all-rounder Moeen Ali might well once again miss out.

On the other hand, the Black Caps will enter the match in a relatively safer position compared to their opponents.

As things stand currently, Kiwis are on the third spot with 11 points in eight matches, which leave them in a relatively secure position as even a defeat (with not a huge margin) will be enough for them to secure final-four spot over Pakistan as they have a far superior run-rate.

However, in case of a big defeat, they will be hoping that Bangladesh will put a great fight and avoid a big defeat against the Men in Green which can become a tricky situation and they would want to avoid such circumstances by winning their final place which would guaranteed them a third-place finish at the very least.

So far, New Zealand have registered wins against Afghanistan, Bangladesh, South Africa, Sri Lanka and West Indies, whereas they have registered defeats against Australia and Pakistan. Their game against India was washed out.

Looking in a bit of detail, the Black Caps team management will be extremely worried about team’s performance in the previous two matches—especially in the batting department where they have been found wanting against Pakistan and Australia.

Those performances made it clear that Kiwis are clearly lacking depth in the batting department which is putting extra pressure on the likes of veteran middle-order batsman Ross Taylor and skipper Williamson.

After two lackluster performances, there might be some changes in the playing eleven of the Black Caps.

It will be interesting to see if New Zealand will be tempted to include leg-spinner Ish Sodhi in place of either all-rounder Collin de Grandhomme or one of the pacers.

That’s not the only change possible in the final playing XI as openers Colin Munro and Martin Guptill’s lack of runs at the top is another concern for the team management and it is expected that either of two will be replaced by wicketkeeper-batsman Tom Blundell who will bat in the middle-order whereas Tom Latham will open.

Venue Statistics for the Game England vs New Zealand

Riverside Ground in Chester-le-Street will be the venue for the Wednesday’s all-important clash. The ground will be hosting its one of the most important fixture ever since it is being used as the venue for international cricket since 1995.

This will be the 19th One-Day International to be played at the ground where team’s bowling first seem to have an edge over their rivals.

Till now, 10 matches have been won by teams bowling first—a record which is incredibly better than that of teams batting first who have won on six occasions.

Average score batting first at Riverside Ground in the 50-over contest is 246, whereas average score for team batting second is 189.

Sri Lanka registered the highest score by a team at the ground of 338-6 in the match against West Indies during the ongoing competition, whereas lowest team total of 99 was registered by England, that too while playing against Sri Lanka, in 2014.

Highest individual score 126 not out at the venue in an ODI was registered by Sri Lanka’s Mahela Jayawardene in 2006. Till date, there have been 10 centuries scored at the ground in ODIs out of which eight were scored by batsmen from Australia, England, Sri Lanka and West Indies (two each from each country).

On the bowling front, surprisingly, it is England’s Graeme Swann who has the best figures at the venue of 5-28, which he achieved in 2009 while playing against Australia. Other than Swann, the only bowler who has managed to register a five-wicket haul at the venue is New Zealand’s James Franklin as he claimed figures of 5-42 in the match against England in 2004.

Host England will be favorites to their win their game against New Zealand. The inclusion of Jason Roy has certainly bolstered the batting resources for England. The likes of Jonny Bairstow, Joe Root and Ben Stokes have shown excellent form with the bat in this World Cup.

On the other hand, New Zealand will need to raise their game with the bat in order to push England in this game. Expect England to register a comprehensive win over New Zealand.