British bookmaker Betfred are one of the latest bookmakers to begin accepting customers based in India, allowing such punters to take advantage of their range of services and features. Before we learn more about just what it is that they have to offer, let’s first look at the history of the bookmaker.

Betfred was initially founded back in 1967 on the British high-street, with the bookmaker having over 1,000 betting shops at the height of their power. Fully licensed by major gambling authorities in both the UK and Gibraltar, their website now attracts large number of betting customers thanks to its range of sports markets and ongoing promotions, among other things. The bookmaker’s reputation has been strengthened thanks to betting partnerships with Wembley Stadium in London, the home of English football, along with the World Snooker Championship and a host of other sporting competitions. Our review will take a detailed look at their operation, discussing everything from markets and odds to banking and promotions, specifically with Indian-based customers in mind. Let’s kick things off by taking a look at the major benefits to registering an account with Betfred.

The Benefits of Betfred

With their significant following across the globe, it perhaps comes as little surprise that Betfred offer a number of appealing services and features when it comes to their sportsbook. Customers are able to take advantage of competitive odds and a number of in-play markets, with relatively few negative factors having been found whilst carrying out our review. However, the following are the standout pros and cons of signing-up with Betfred:

There are a good number of sports betting markets available at Betfred, with the likes of cricket and soccer helping to cater for customers in India. While the amount of markets is not comparable to some of the other leading bookmakers in operation today, the depth of markets at Betfred is certainly impressive, which for many will be more important. There is certainly a European emphasis to Betfred’s sportsbook, with sports including darts and horse racing featuring, however events from the world of basketball, Australian Rules and UFA demonstrate their diversity also. In total, the following markets were available to Betfred customers at the time of writing this review:

Meanwhile, the depth of markets including cricket, soccer and tennis are particularly pleasing at Betfred, while they are also making improvements in other areas. Cricket fans can bet on Test, T20 and ODI matches from around the world, whether it being who the leading run scorer will be, leading wicket taker, number of runs, outright winner or method of dismissal, among others. Elsewhere, fans of soccer have a huge number of betting options, with European leagues from England, Spain and Italy in particular being very in-depth. Punters can bet on the correct score, under/over goals, first goalscorer, number of corners and handicap markets here, with the profile of the game determining the exact number of options. 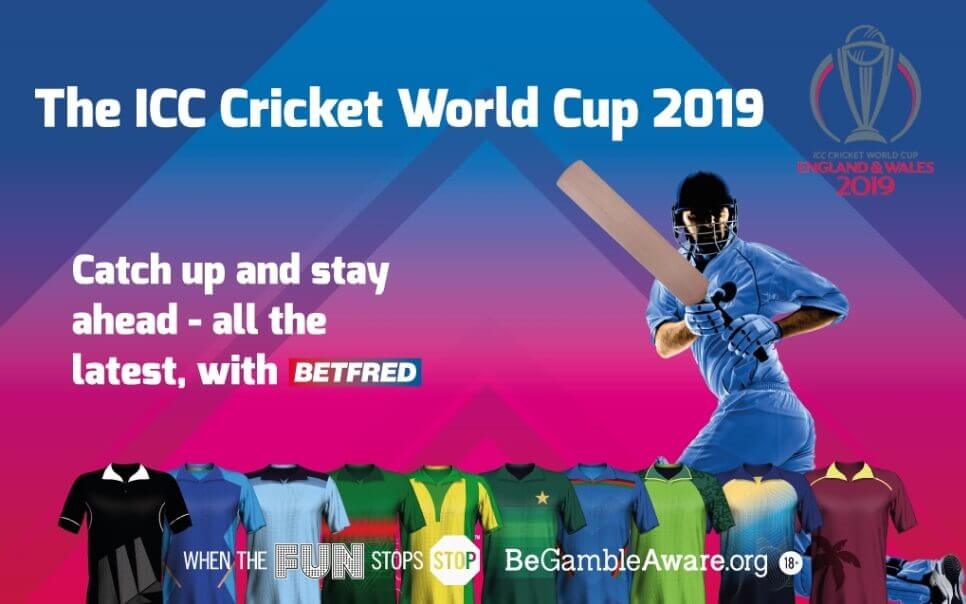 Elsewhere, the following promotions were available to existing customers at Betfred at the time of writing this review, which help to both maximise winnings and minimise losses on their site:

Football DD/HH – If your winning first goalscorer scores a 2nd, Betfred will double the odds. If they net a 3rd, then they will treble them!

DD/HH In-Play – Bet in-play on the next goalscorer market (First, Second, Third Goalscorer etc) and if it wins and he scores another, Betfred will pay out at double the odds, if he scores a third after that then they will pay at treble the odds.

Acca Insurance – Place a 5+ Fold Football Match Result accumulator on selected leagues and if one team lets you down Betfred will refund your stake as a free bet.

Neck Or Less – Back a horse in a selected race, and should it finish second by a neck or less, Betfred will refund your stake as a free bet.

Horses BOG – Take an early price on your selection and if the SP returned is bigger Betfred will pay you out at the bigger price.

The Betfred website still has a traditional feel to it, with a lack of graphics and technology meaning that it is relatively easy to use on both desktop and mobile. All sports markets are listed on the left-hand side of the page, while top markets are also displayed at all times on the home page. Punters can also select their preferred way in which they view odds, whether it be fractional or decimal. Meanwhile, a dedicated live betting page means that there is no confusion surrounding pre-match or in-play markets at Betfred. Features including promotions, cashing out and live streaming are also easily accessible at all times thanks to conveniently placed links. 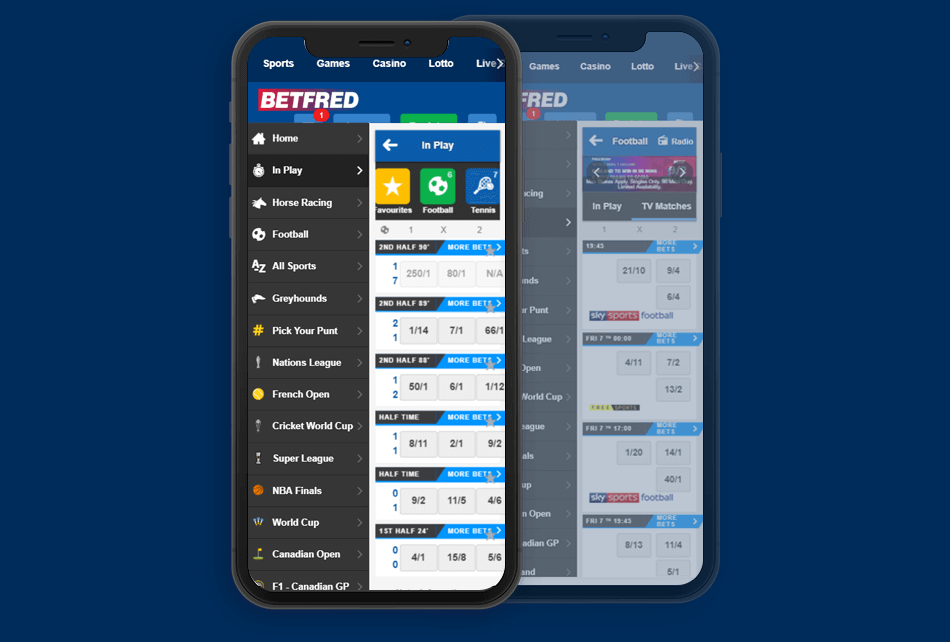 Mobile customers do not have to worry about missing out on placing a potentially lucrative bet because they are away from their desktop, with Betfred having developed a hugely efficient mobile app, while their website works well via mobile browsers too. Their app is available to download using both iOS and Android devices, offering all of the same features as found on their main desktop platform, including live streaming, promotions, banking and customer support. Meanwhile, the speed of the Betfred mobile website means that it does not work quite as well, however it still allows for bets to be placed when on the move.

Live betting is also readily available at Betfred, with markets including soccer, cricket and tennis featuring on an almost daily basis. Such markets are visible as soon as you enter their sportsbook, while they can also be accessed by clicking on the “In Play” link at the top of the page. Odds are regularly updated in accordance with goings on in individual events, with those in the know able to bet on their favourite tennis players to recover from a set down to win or a cricket team to claim a wicket within the next over.

Their live betting options are complimented nicely by their live streaming service, which offers customers the chance to watch live sporting action from around the world as it unfolds. A positive account balance is required in order to gain access to such streams, whether it be high-profile European soccer action or matches from either the ATP or WTA tennis tours, among others.

Betfred are unable to compete with the best in the business when it comes to betting odds, with an average betting margin of around 4.9% demonstrating that there is still work to be done in this area. The lower the profit margin, the better for the customers, with football providing around 3.5%. Elsewhere, Betfred offers a small number of promotions surrounding enhanced odds or best odds guaranteed on horse races based in the UK & Ireland, which help to make up for their less than convincing prices.

There is a decent amount of banking options available to customers in India at Betfred, with the bookmaker having made sure that both deposits and withdrawals are as easy as possible. All methods allow for instant deposits, while withdrawal times range between 24 hours to 5 days. Credit and debit cards and increasingly popular e-wallets are all available, however it is worth keeping in mind that opening deposits made via either Skrill or Netller will not qualify for the Betfred welcome bonus. In total, the following banking options are available at Betfred:

Support is available 24 hours a day at Betfred, meaning that those requiring answers to questions or help with betting issues are generally not made to wait too long, although this does depend on which avenue you use. Their live chat feature is perhaps the most efficient in this area, with an advisor answering our message within just five minutes during testing of the bookmaker. Elsewhere, emails are responded to within 48 hours at the latest, while there is also a telephone number available too. For those looking for a quick answer to a commonly asked question at Betfred, a detailed FAQ page is on hand on both desktop and mobile, which often means that there is no need for additional support.

Betfred are an excellent all-round bookmaker, performing well in a range of areas including live streaming, in-play betting and customer support. While their odds are not among the most appealing online today, Betfred is an excellent option for those new to the world of sports betting, with their website and mobile app being very easy to use and concise. A generous welcome bonus is available to new customers, along with a range of ongoing promotions, something which has become increasingly important for punters over recent years. Betfred is certainly a trustworthy name within the industry, with their website being 100% safe and secure, while the fact that they work with a number of leading organisations in promoting responsible gambling also shows what type of bookmaker they are. All in all, customers in India should look beyond the fact that Rupees are not accepted as a form of currency, with there being much more important things to occupy yourself with at Betfred.